We're open 24/7 and ready to help you during COVID-19 with Sanitization Solutions.

Big Fish Stories Are Upon Us

Published by SEO on June 2, 2015 in category: Water Damage Restoration 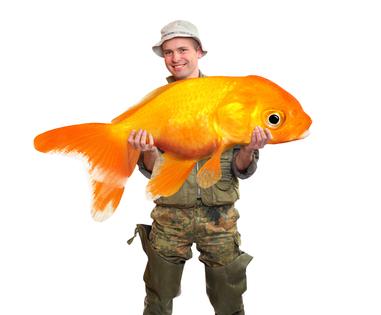 With the advent of National Fishing Week upon us, so too is the time-honored tradition of telling whopper fish tales about Moby Dick sized trout that capsize hapless intrepid fisherman and get away, whales that could swallow up whole cities, and Kraken-like terrors that broke the line. Fisherman the world over know this tradition well, though with the onset of the digital age, these tales have all but jumped the shark in their extremities, straining the boundaries of believability to their breaking points and ushering in everything from photo shopped prehistoric creatures to mermaids with hooks in their mouth. But along with all of the bombastic impossible tales, the occasional ‘fish that got away’ story is actually so well crafted, that it might even be true. This is one of those stories.

The bass wasn’t especially large, no bass really are. But this one was a fighter, and they always feel bigger when they put a good fight. This fish was no mere fish. It didn’t just take the bait and get reeled in like most of the others in the lake. This one knew it was being caught and it raged against the drag of the line. Bass don’t fight for long, but this one did. It fought like a warrior that had seen the battlefield more than once, and didn’t plan on giving in today.

It took the line when the day was young, and did not stop fighting even when the daylight was running out. Finally, at the end of the struggle, the battle subsiding, it began heed the line as it was reeled in. Next to the boat it was a behemoth, a giant bass that must have been born during a time on earth when monsters roamed free.

The line and lure dangled from its mouth. It was a characteristic bass pattern lure, with alternating bands of metal that reflected varying amounts of light. The shimmer of the spinner bait lure caught the glint of the fading sun just as the bass opened wide, chomped down and cut the line free. It swam there next to the boat for a minute or so, taunting. Then with the spinner still dangling from its mouth, it swam off into the depths and out of site. The sun was gone, and the gaining night hastened a frustrated conclusion to the day’s affairs.

One year later, on a day as clear as they come, the line got taught again. The same weight pulled at the drag and the reel spun backwards giving out line. And then more line. The drag passed the midway point of the line left on the reel before it started to abate. Then the reeling, and the give. The reeling and the give. Again day faded as the fish fought with the age old nemesis of the fisherman, both of them old, and battle hardened. Neither would give in to the struggle. Neither would give in to themselves. Finally as day turned into night once more, the reeling began to win over the dragging and the battle began to subside.

As the bass approached the boat, it’s size was immense and inordinate. It couldn’t be the fish from last year. A fisherman only catches a fish like that but once in a lifetime, if that. There was no way this could be the same fish, and yet how many colossus-sized beasts like this could there be in a small lake? Finally there was no more line left to reel in, and as it approached the edge of the boat, just before being brought in as the catch of a lifetime, it pivoted slightly and showed its face to the fisherman. And as it did, it revealed a spinner bait, the kind with alternating bands of shimmering metal, of the very same lure lost last year.

If fish could smile, this is what it did right before it chomped down on the line again severing it, and setting itself free. Little did it know as it swam away into the darkness that this would make for the greatest big fish story that no one would ever believe. And on it swam. Now with two lures in its mouth. See ya next year.